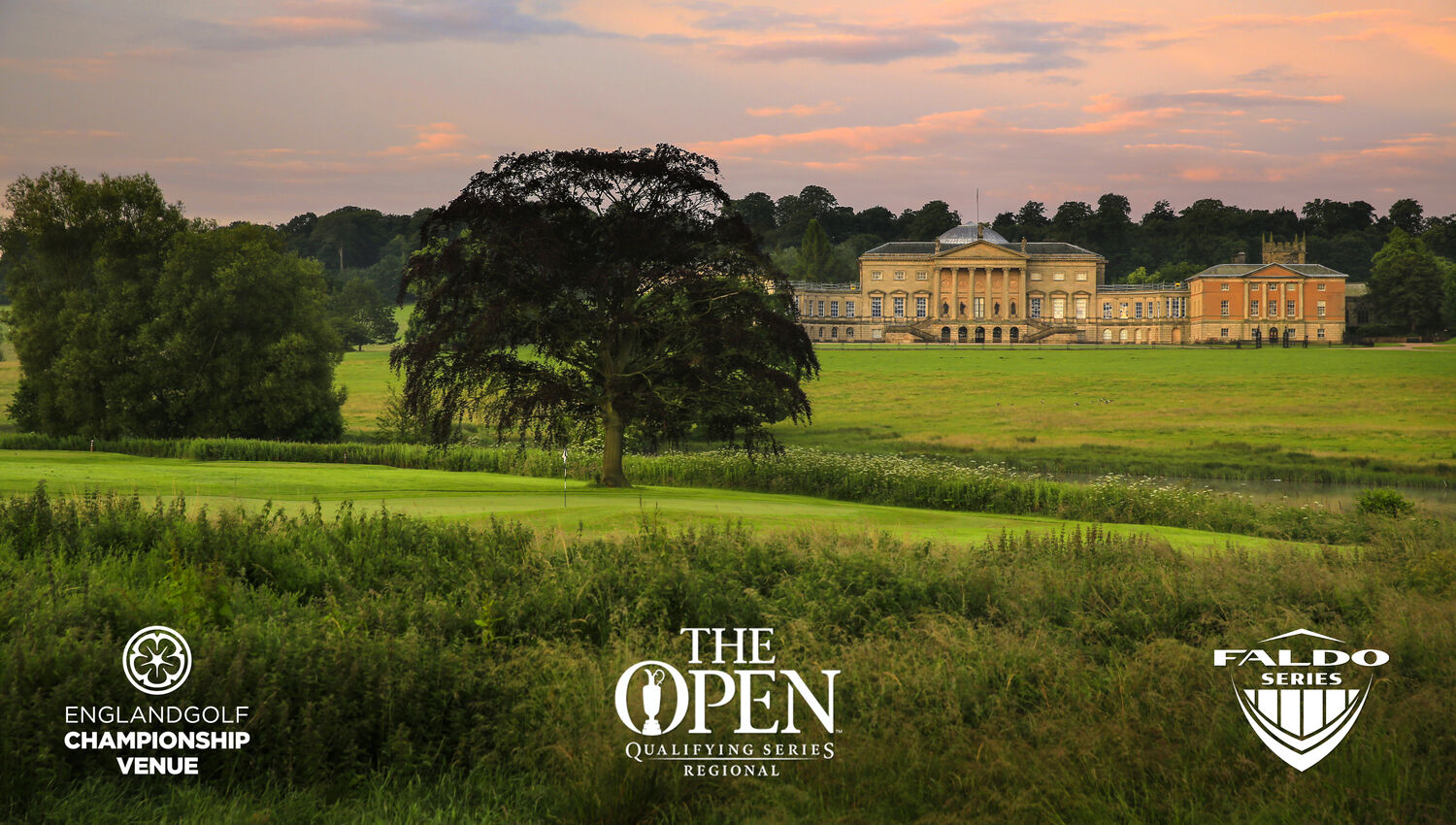 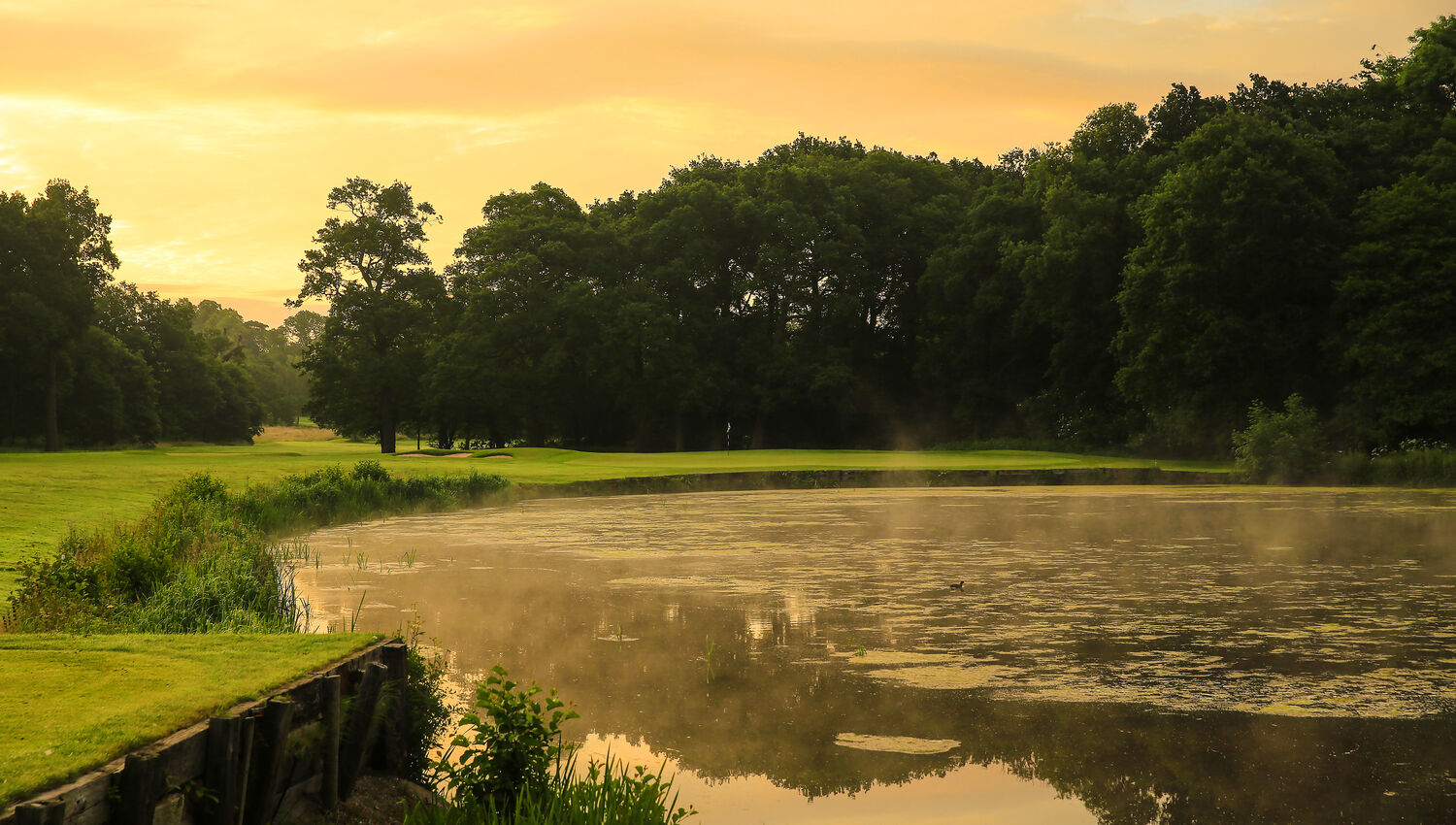 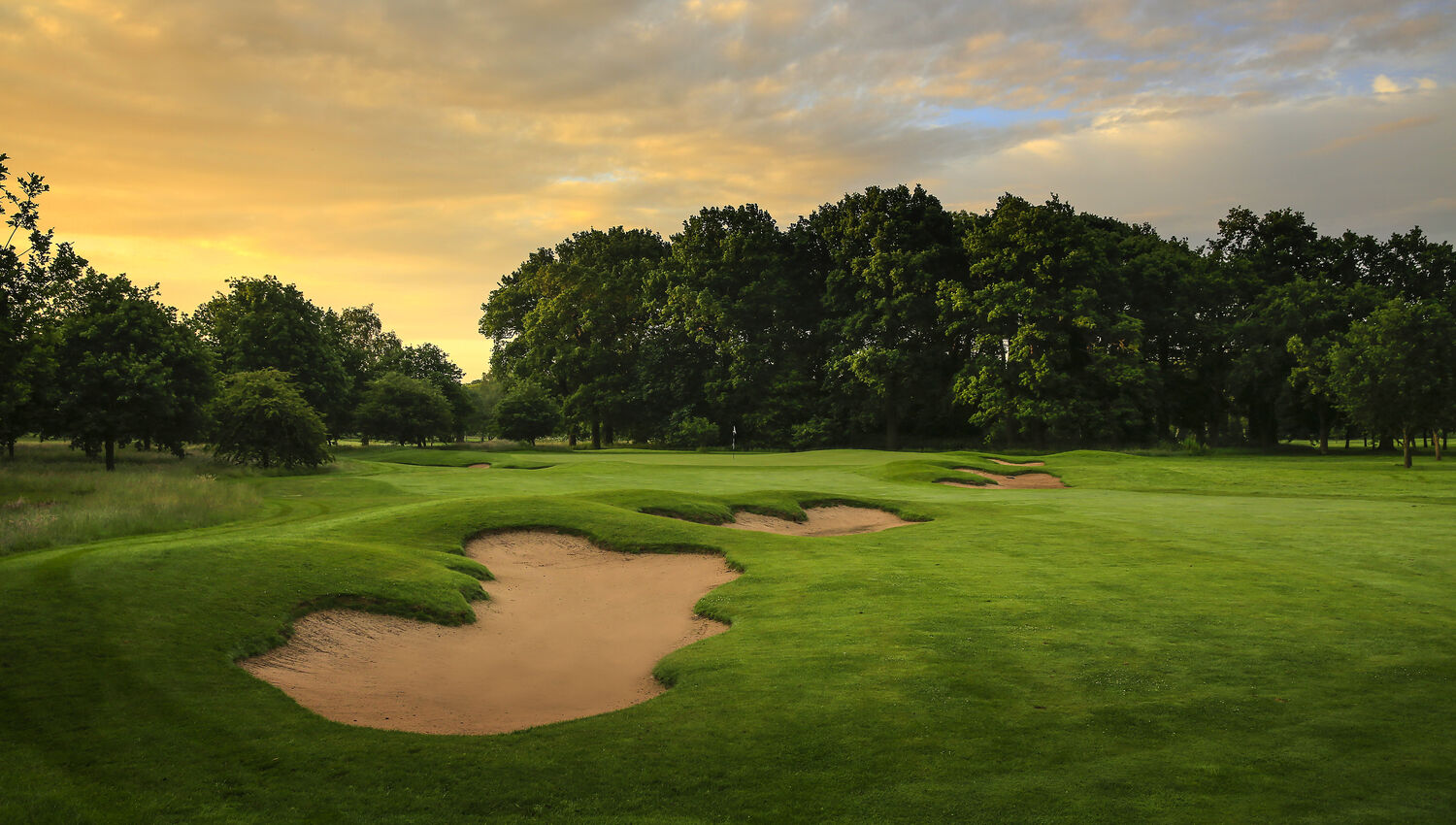 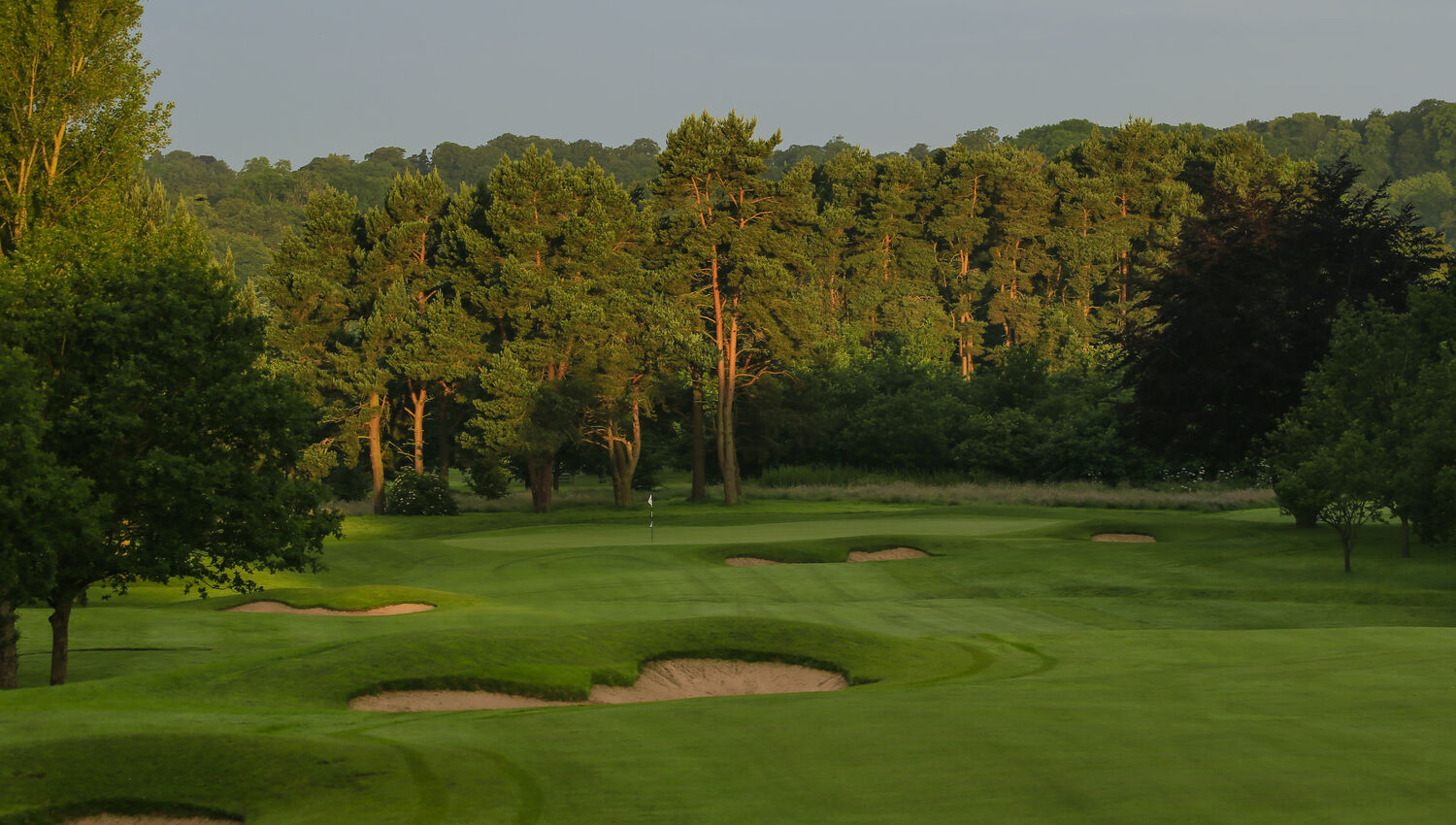 To view Mackenzie and Eberts 2014 review please follow the link

The bunker work is on schedule. Holes 18 and 9 have been turfed this week - pictures below 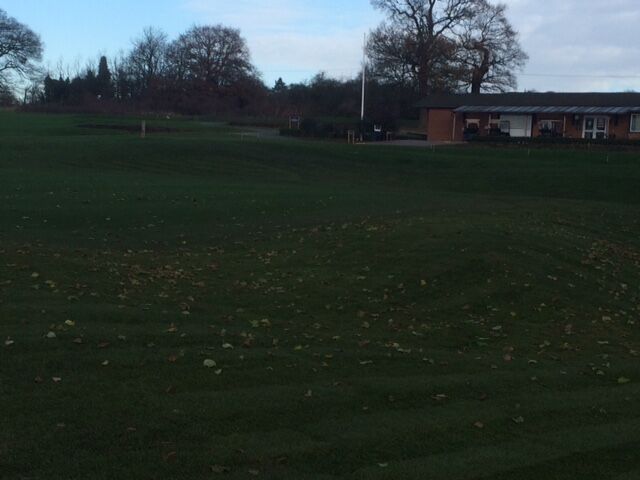 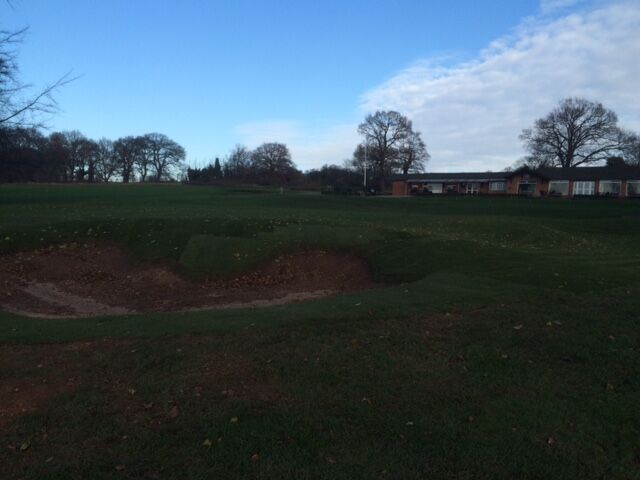 The new bunker on hole 18 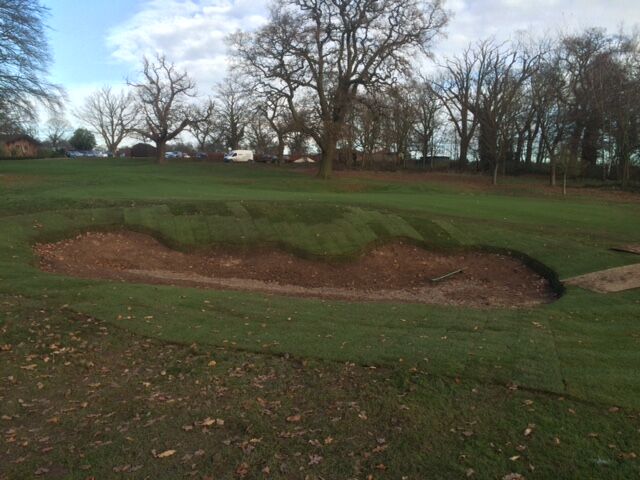 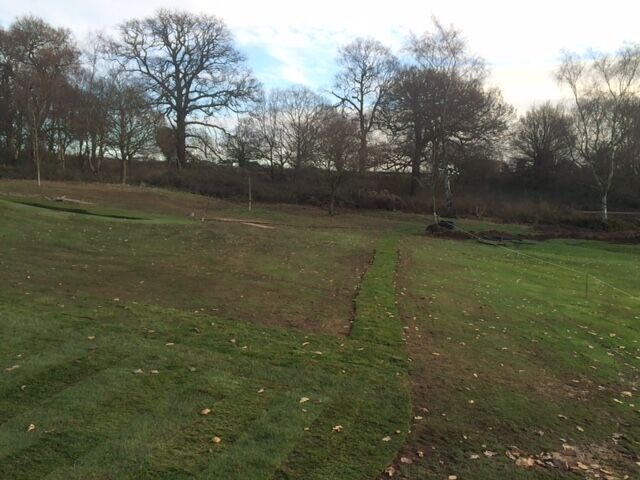 Next week the turf will be laid on the 2nd hole. It is important to have the turf down before Christmas for it to root before the weather turns too dry!!! January will see the bunkers lined with upside down turf  and the bunkers will start to have sand in them from early February.

We are now on the 18th hole. The front bunker is been made a little larger to protect the front of the green. The back bunkers are being removed and replaced with a grass hollow at the back and a run off area to the right 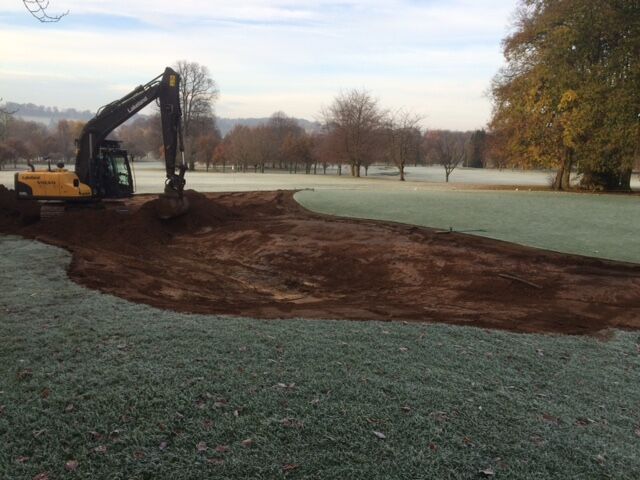 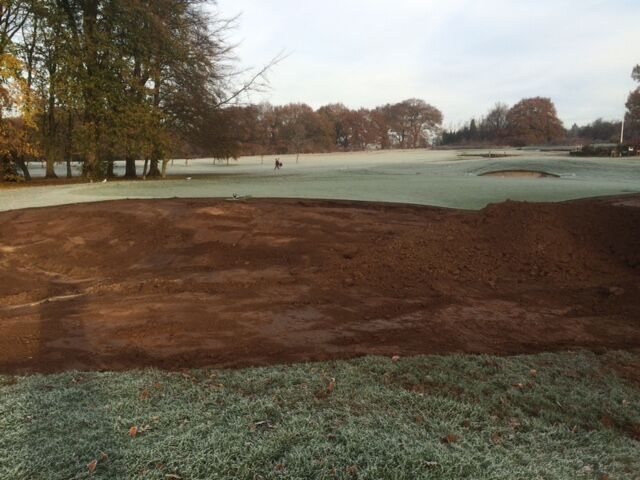 The front bunker on hole 18 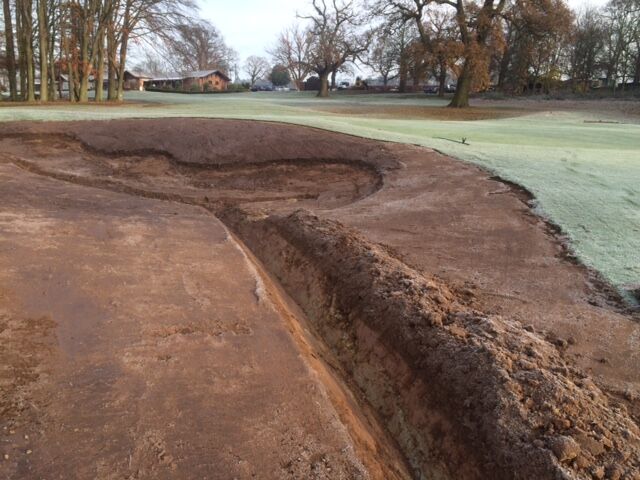 The left hand side bunker on the 9th hole. the trench has been dug for the drainage pipe to be laid

The shaper is on the final stretch of the bunker work.

The 17th hole has all been re- turfed , the left hand side has been seeded.l The turf is beginning to settle down on the green

The bunker on the second hole has now been shaped and is awaiting the new turf to be laid. The bunker has been moved to the right and is a little closer to the green allowing for an easier run up to the putting surface.

The 2nd hole - Shaping of the three bunkers is nearing completion . A new drain is to be inserted for the fairway bunkers but finding the correct fall is being problematic. The picture below shows the two new fairway bunkers

Below the green side bunker on hole 2

Above the turf blocks have been placed in the right hand side bunkers of the 4th hole. The root zone has been applied and is now ready for the turf to be applied

The majority of the turf has been relaid on the 17th hole. The left hand rough has been seeded and the lip of the bunkers are awaiting turf

Tomorrow we will be starting the 9th hole.

Tom McKenzie came and visited the club yesterday and marked out the remaining bunkers on holes 2,9 and 18

Above is the outline of the new bunker left hand side of the green on the 4th hole.

The right hand side bunkers on the 4th hole

I hope this allays some fears that have been expressed that all the area that was stripped of turf was going to be bunker!

Today the 2nd  hole may be played as a par three from the 150 yard marker. When work starts on the greenside bunker the temporary green will be in use

The Bunkers on hole 3 have been completed by the shaper

The green side bunker right of the 3rd green

The Shaper is now moving onto the 2nd hole. Tomorrow the hole may be shortened to a par 3 of approx 150 yards. At some point the 2nd temporary green will be in play.

After the torrential downpour this morning we are still making good progress. The 17th hole is starting to be re-turfed , the left hand rough has been seeded. The shaper has almost completed the 4th and will soon commence on the 3rd hole

View from the front right of the 17th green, in the foreground is the new drain from the LHS fairway bunkers

Approach to the 4th green with the new bunkers

With the 4th hole almost complete tomorrow should see a start being made to the 3rd hole.

All the shaping has been completed on the 17th Hole. The turf blocks have been inserted in the greenside bunkers

View from the 17th fairway

Picture above The turf has been relaid on the right of the 17th Green. The subsoil has been turned over and new rootzone applied to allow the roots to penetrate down into the ground. Dave is preparing the top of the bunker before applying the new turf.

The left of the 17th green. The blocks have been placed around the edge of the bunker, the turf is back on the green

The back bunker to the right of the 4th green.

The project is still ahead of schedule but the continued downpours are starting to make the soil sticky and making the work harder.

We originally planned to start on Monday but the contractor has been delayed by two days.

The Sun is out today and the work today is progressing well. The shape of the left hand greenside bunker is already done and the top soil is being applied to create the mounding and undulations.

To prevent damage to the 17th fairway as it is being played to a temporary green please can a mat be used for all shots played from the fairway. There is not the option to move the ball to the semi rough.

I will update you on the progress on Friday and lets keep our fingers crossed for dry weather.

Day 3 of the course work

The course work is one day ahead of schedule and despite the rain, 5 of the bunkers on 17 have been shaped and the large machine should be moving to the 4th hole by Tuesday.

The left green side bunker

the right green side bunkers

view from the 17th fairway.

The bunkers will be constructed the same way as last year with a drainage, turf lined and the edges built with blocks of turf cut from the practice ground. If you are using the practice please do not hit from the turf nursery

After over 40mm of Rainfall over the weekend work started again at 7am this morning. The 17th shaping is nearing completion

A view from the middle of the fairway. The gap between the bunkers is narrow. The fairway will then open out behind the bunkers on the left.

Photo taken behind the LHS fairway bunkers. Tom has white lined the outline of each bunker

The turf blocks being laid on the outline of the bunker - Right hand side of the green . The turf on the green has been taken up, rootzone is being applied to mould the green and bunker together

The left hand side green bunker. The turf from the green stacked at the side. You can look forward to a couple of tight pin positions especially when approaching from the left of the fairway. The turf will be relaid this afternoon so as to help speed the recovery.